My friends and I celebrated a double birthday celebration last Sunday at Milestone’s. They have a coupon for the birthday person in which their entree is free if 3 entrees are purchased. When my friends and I arrived for our 6:30pm reservations, we were told that Milestone’s was sold out of prime rib. Apparently you could reserve prime rib when you make your reservations if you know for sure that you’ll be ordering prime rib the day of. So most of my friends decided to order pasta. Two of my friends got the chili crusted tilapia ($22) while another two had the classic mojito ($8.49). I had the Ultimate Bellini ($8.99) and Beef Tenderloin. I also shared the ahi tuna tacos ($15) with another friend who also got the Original Bellini ($6.99).

The Ahi Tuna Tacos are seared pepper crusted ahi tuna with cilantro lime slaw and avacado cream in a soft shell tortilla with deep fried avacado on the side. I would prefer a thicker slice of ahi tuna however on the whole the taco was quite good. The deep fried avacado was interesting. 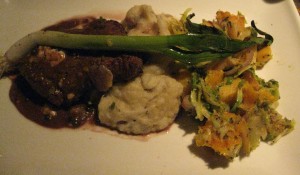 The Beef Tenderloin was on the seasonal menu. It’s beef tenderloin with garlic infused mashed potatoes and cabbage and squash on the side with a stalk of green onion. It was quite tasty. 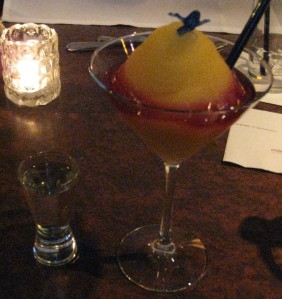 The classic mojito is rum, lime juice, mint, cane syrup and soda. One of my two friends who had it thought it was refreshing. It was his first time trying a mojito. 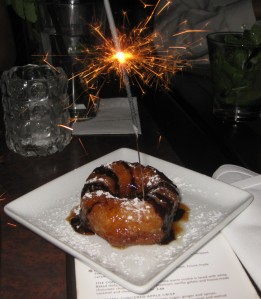 The birthday boy&girl also get a donut covered with chocolate sauce and icing sugar with a snazzy candle on it. It looks better than it tastes.

I recommend Milestone’s for birthdays (nice treat for the birthday boy/girl) or the Monday Girls’ Night Out special.

My university friend and I were wandering around Roncesvalles on a sunny Saturday and we decided to eat at La Cubana. Neither of us has ever eaten Cuban food before. La Cubana has a very 60s/70s diner atmosphere although it has limited seating. We ordered 6 appetizers and 1 dessert. At first we thought we would be half full from the appetizers but it turns out that those 6 appetizers were very filling. We had the cod croquetas ($6), conch frituras ($7), chorizo empanadas ($7), habanero glazed fried squid ($7), guava BBQ short rib ($8), tostones rellenos beef picadillo ($6) and the donuts ($5). I had wanted to try the Cuban coffee natilla which our waitress said was suppose to be like creme brulee however there’s always a next time.

The cod croquetas were good. Cod croquetas are small breadcrumbed fried rolls filled with cod and potatoes and garnished with green onions, a lime wedge and this sweet and slightly spicy sauce. 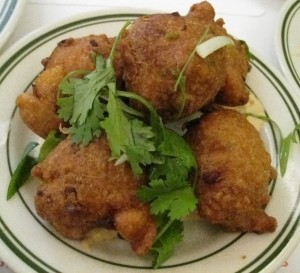 The conch frituras wasn’t exactly what I was expecting. I thought it would be something made from conch rather than conch shaped fried dough. It was this appetizer that made my friend and I become stuffed.

The habanero glazed fried squid was really delicious. It’s garnished with a lime wedge and green onions. I thought it would be spicy because it’s suppose to be habanero glazed however it’s more sweet than spicy to me. 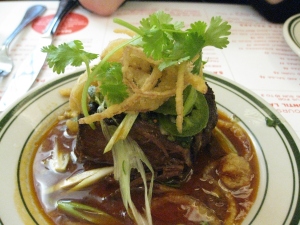 The guava BBQ short rib was scrumptious. The short ribs are braised in Coke and beef stock. It’s garnished with green onions, jalapeno peppers and cilantro. The plate is covered with guava barbecue sauce. If you don’t like jalapeno peppers, make sure you remove all traces of it before eating. I didn’t find the jalapeno peppers to be very spicy however my friend found them spicy enough. 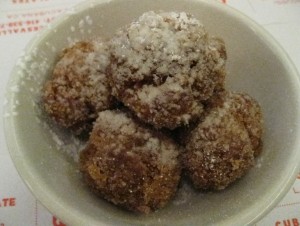 The donuts were really tasty. They remind me of a larger version of timbits. It’s covered with icing sugar and it tastes very cinnamon-y. 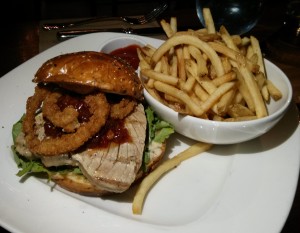 The ahi tuna club is grilled rare tuna, bacon, sweet pepper relish, arugula, and panko onion rings in a bun. It comes with a side of fries. My friend enjoyed it.

Overall, Joey’s doesn’t live up to its hype.

Posted on April 2, 2014 by travellingfoodtographer

The mackerel is grilled Korean style. It is served on a sizzling plate and garnished with a lemon wedge and a sprinkle of green onions. The mackerel I had had lots of bones in it while the mackerel my friend had had no bones.

Overall, the mackerel and soup combo tastes yummy at a decent price.